New tool for labour market integration of refugees is working

Since the social partners and the government agreed on a work-based training programme for refugees last year (IGU), the take-up has been slow. But this trend is reversing, and there has been a rising inflow of refugees in integrative training programmes in Danish companies during the past five months. Almost 500 more refugees have found an IGU-job during the first six months of 2017. 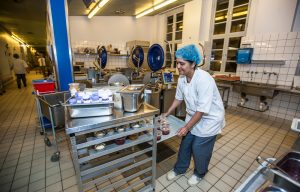 This is the one-year anniversary of the integrative vocational training programme (IGU). This programme allows refugees to enter the labour market by means of traineeships in Danish companies. Today, 680 refugees and persons granted family reunification have embarked on an IGU-programme. This gives them both a traineeship and vocational and language skills’ upgrading. This has allowed them to take an important step away from dependence of welfare benefits and into active employment. They have been given the chance to achieve what most people wish for – the chance to provide for themselves and their families.

The integrative training programme is part of the tripartite agreement, which the social partners, LO and DA, concluded with the Danish government – and we are both happy and proud of this scheme. It is an outstretched hand to the refugee or the persons granted family reunification, allowing them to gain a foothold on the labour market and providing a stepping-stone to further education.

Integration is very much a matter of skills? upgrading. The Rockwool Foundation has just published an analysis of the educational background of refugees. The analysis shows that refugees generally have little in the way of educational background and a relatively low employment rate. An active labour market integration effort must contribute to changing this picture. In this connection, the IGU and the other tools, such as wage subsidies, play an important role.

The IGU contains tailored classroom training programmes. However, the most significant skills? upgrade that the refugee will get is the everyday participation at the workplace. Just as is the case for Danes, going to work means ongoing training and a close touch with one’s profession on an everyday basis. It gives the refugees a valuable insight into the Danish work culture, tone of communication and, not least, the opportunity to speak Danish on an everyday basis.

LO and DA would have preferred to see even more refugees get an IGU-job, but we can, fortunately, conclude that there has been a good inflow during the past five months. Almost 500 more refugees have found an IGU-job during the first six months of 2017.

We expect that a similar increase will continue in the time to come due to a rising interest in hiring refugees for an IGU-position. More than 300 companies have already hired a refugee for an IGU-position, and we really appreciate this, even though there is still a long way to go when it comes to informing other companies of the IGU-scheme.

Number of new IGU-jobs since July 2016 according to the Danish Ministry of Immigration and Integration: 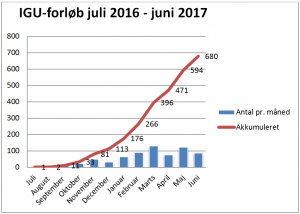 Social partners optimistic about the future of IGU

LO and DA are happy to continue to contribute to this work. We are convinced that, a year from now, many more refugees will be enrolled in the integrative vocational training programme.